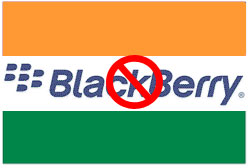 I bet that this won’t happen anytime soon but apparently the home ministry is considering a ban on Research in Motion’s (RIM) BlackBerry service. No, they are not unhappy with the service delivery but it’s the threat it poses to country by encrypting the data.

You ask how? Well, when a BlackBerry user sends an e-mail from his device, his e-mail is sent to the server outside India and then it
is sent from the server to the destination in the form of encrypted data which cannot be intercepted by any security agency. This security measure is a good thing on the part of BlackBerry users but no snooping of data means government cannot track the activities of terrorists if they happen to communicate via BB.

RIM along with the operators and DoT will have to come to a compromise soon as they would not want to lose a substantial subscriber base which gives a lot of revenues to these companies.