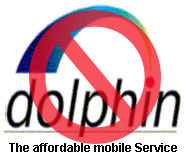 Here’s some bad news for all considering to take Dolphin connections. Government owned telecom firm MTNL has stopped offering new mobile connections for Dolphin in the city. Sources suggest that MTNL has already stopped advertising for its cellular services Dolphin.

Is it a new tactic by government to create a deliberate scarcity or something else? However, MTNL officials defend their stand by saying that their equipment supplier, ITI (another PSU) has failed to expand capacity and meet the handset demands. ITI has a technical tie-up with French vendor Alcatel and was given an order to expand its manufacturing capacities more than a year ago but has failed to supply MTNL with the necessary number of handsets.

Ironically, there is no such problem in the Delhi circuit as the supplier for Delhi, Motorola has the required production capacity and MTNL can give new connections as much as demand is there.

This is one of the silliest reasons we have come across. Putting blame on the handset manufacturer won’t win any sympathy from the potential customers. But in reality, MTNL cares a damn about this and knows that customers will return to them because of their attractive call rates.