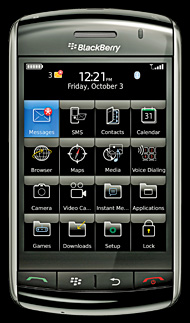 Vodafone Group has decided to launch the BlackBerry Storm smartphone in all its global markets which is a result of the long-term alliance between RIM (Research in Motion) and Vodafone. The BlackBerry Storm is the first ever ‘clickable’ touch screen smartphone and will be available exclusively on Vodafone’s high speed 3G mobile broadband network in Europe, India, Australia and New Zealand from next month. (Hope India gets 3G by that time)

The 3.25″ ‘clickable’ touch screen gives users the sensation of actually pressing down on virtual keys, which also lights up when touched. This makes it easy to type texts and e-mails as well as navigate through the phone’s functions. This phone is the most advanced smartphone to date from RIM’s stable and would be positioned globally in competition to Apple’s iPhone, though it would obviously be targeted at business customers. No official pricing details are available yet, but these companies are expected to reveal prices in the coming weeks.