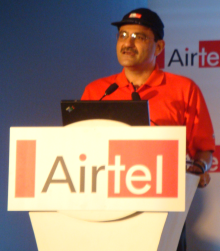 In times when the global slowdown is gradually recovering, Bharti Airtel Ltd. expects to add 3 million subscribers every month. When asked the firm’s CEO Manoj Kohli, he says that their franchise Airtel is unaffected by rising competition. He added, “Bharti would not respond to rivals’ moves and has its own strategies. We are very clear; we will maintain, if not enhance, market leadership.”

So is Airtel not even affected by the ongoing price war and the entry of new players in the market? To this he responds that, “New players have nothing but tariffs to offer.” Sounds like a confident reply. We wish them All the Best.

After having an unsuccessful bid with South African based MTN, Bharti is now considering buying Millicom’s Sri Lankan assets. Millicom International Cellular, also known as Tigo, is a mobile phone network provider operating majorly in America, Africa and Asia. Based in Luxembourg, the company provides mobile services in 16 countries and has recently put its mobile operations in Sri Lanka up for sale.

With the additions done and dealt with, let’s have a look at the market shares and user base of these GSM operators. Here it goes:

We Say: With Bharti adding the highest number of users to its kitty each month, it is unlikely that it will lose its position. However, Vodafone is trying its level best to reach closer by adding around the same number of users as Airtel. BSNL and Idea also seem to be battling it out for the third position. Though Reliance may seem to be a small player out here, it is adding large number of users each month and we expect to see it climbing up the rankings soon.

The month of February turned out to be quite positive for Indian Telecom, with GSM operators adding 9.18 mn users in the month. This has taken the total count to 277.11 mn. In percentage terms, the industry clocked a healthy growth rate of 3.43%.

Getting into specifics, here is how some operators contributed to the figure (additions and growth rate):

We Say: Going by the figures, nothing seems to be obstructing the growth of Indian Telecom, making it even more lucrative to more giants. However, we hope to see this growth accompanied by a simultaneous growth/ improvement in the management and service quality.

Airtel has done it again with their new commercial. With the right elements, this ad touches each and every Indian. It brings out the core values and somehow manages to put across its message to the consumers. The core elements: The family, the village setting and the attachment between the father and son beats any other ad in its clan.

Though the idea may not be to sell, it surely adds to the brand value. We think that the Indian touch along with its great selection of actors is what makes the ad stand out. Bharti’s move to have ads based on the same platform seem to have worked, but they tend to evaporate too soon, unlike other ads in the category.

However, in terms of adding equity, and getting the rural consumer interested, this ad definitely does the job for Airtel. And with millions of them enrolling themselves to the telecom revolution, this might just touch the right chord at the right time.