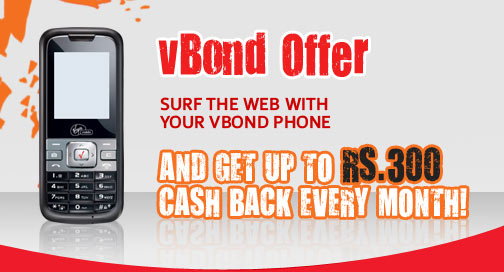 We are all well versed with Virgin Mobile’s USP of paying its users for calling other Virgin numbers, which might have worked wonders for them. Because here is another crazy plan by the operator and this time around, it’s paying you to surf the net. Here is how it works:

END_OF_DOCUMENT_TOKEN_TO_BE_REPLACED

After playing it Kewl and Sleek, Virgin mobile now brings to you vGlide, the first slider from Virgin’s stable. Here’s some Gyaan about the phone:

Apart from this, you get the normal talktime, free minutes et al. Given below are the specifics: END_OF_DOCUMENT_TOKEN_TO_BE_REPLACED

Virgin Mobile today announced a new enticing SMS offer dubbed as the New Thumb Rule. The offer comprises of giving the user, a daily quota of 100 local and 100 national SMSes free. Yea, it looks pretty lucrative but is it worth? Let’s do the math.

To activate the scheme, a Virgin Mobile user first needs to send 3 local SMSes or 3 national SMSes to get his daily quota. In this case, we’ll concentrate only on local messages. Each message sent to a local number will be charged Re. 1 (except in Tamil Nadu, Chennai, Karnataka where it will be charged 50paise). Say you sent the first three messages everyday making the total expenditure of 30 days to Rs. 90. This gives you 3000 messages in a month. Well, that’s cheap but not cheap enough when you compare it to some SMS packs available from other service providers. And another thing is that the free messages allotted, has to be exhausted on a daily basis. You cannot carry forward the remaining number of messages.

You can learn more about the offer from here.

Taking the GSM competition head-on, Tata Teleservices brand franchise Virgin Mobile, reduced its STD and local call rates to 50p/min. The catch here is that this call rate can only be enjoyed after a user is done with his/her initial three minutes of local and STD calls which would cost Rs 1.50/min and Re 1/min respectively.

Virgin Mobile, which is a youth centric telecom service, has made an excellent move by slashing the STD charges. According to a recent industry research, STD calls comprises of around 25% of the total bill amount of an urban young subscriber. So this offer will definitely meet the behavioral needs of youth customers by providing a value proposition on long distance calling.

The much hyped and talked about YoYo ad by Virgin Mobile is making rounds amongst the youth. But what does the Ad trying to convey? The Ad basically talks about how, through Virgin, you can make free calls to your pals.

The plan communicated in the Ad is the Vpower Plan. Pay Rs.28 per month and get calls to other Virgin Mobile numbers @ 10paise. It works like a YoYo because the person you call earns the same amount thus making it FREE. There is a condition to the plan which goes like this:

Virgin Mobile’s another bait for new customers. With every Virgin Mobile handset purchase, the csutomer will get:

We say: Virgin mobile is trying to lure customer by offering such freebies, but somehow it doesn’t seem to be working for them. They need to bring in some new, mid and high-end handsets to attract today’s young generation.

Monday: Tata Indicom reveals its Platinum Postpaid Plan and we decided to peek inside this full value offer.

Tuesday: MTNL is definitely considering their customer’s criticism. Apart from offering basic cellular services, they are rolling out new services just like the recent MTNL Live which is a Live Photo Sharing Service.

Friday: The fire in one of the buildings in Mumbai halted Airtel services in many parts of the city. According to Airtel 90% of the services has been restored but many readers are still complaining about the disconnection.

Official statement released by Airtel said “To alleviate our customers’ issues, we have also proactively rerouted calls to ensure continued service. Also, majority of the impacted customers were not charged for the calls made.”

Virgin Mobile introduced another vPower recharge voucher that allows Virgin Mobile to Virgin Mobile calling at 10 paise per minute. This voucher is priced at Rs 28 and comes with a validity of 30 days.

One of the most amazing thing about this voucher is that, wherein one Virgin Mobile user is spending 10 paise per minute to make the call, another Virgin Mobile user is earning 10 paise per minute to receive the call, which means that calling is virtually free but of course you will have to shell out Rs 28 every month to make this whole thing work.

Monday: Last week marked the sixth death anniversary of Mr. Dhirubhai Ambani and we at Tele Gyaan decided to pay him a small tribute.

Tuesday: Check out the cheapo vBling from Virgin Mobile. A flap phone for tight pockets. The latest update in the 3G spectrum scene is that DoT denied the allocation for CDMA operators. We know that these operators won’t gulp this pretty easily.

Wednesday: As one of our commenter points out “i hav been hearing since last yr
god knws when idea really hitz in mumbai circle”. And we thought the same initially but now they are raring to go. August is the month of the expected launch.

Thursday: Reliance is offering Jaadu Pack for Rs. 35. Check out the details here.

Virgin Mobile’s latest offering, vBling wants to tap those who wants a classy looking phone for a cheap price. Available at just Rs. 2499, the phone packs all the Virgin Mobile goodness like lifetime validity and access to vBytes (Virgin Mobile’s download service).

On the feature front, the all silver phone sports two display screens, weighs on the lighter side at 72 grams, FM Radio and comes preloaded with games and other multimedia stuff.

Correction: vBytes is not WAP enabled but it allows users to download ringtones, wallpapers etc. More info on vBytes.